This is to further post on Prometheus monitoring.  In the earlier section we have seen how to install and configure.
https://sunlnx.blogspot.com/2020/11/prometheus-installations-and.html
In this section, we could see below topics
Introduction to Scrape Targets
When you install prometheus, it would install two metric endpoints.
Prometheus : http://127.0.0.1:9090/metrics
Node Exporter : http://127.0.0.1:9100/metrics

You could see the same when you go to target sections in the Prometheus section. 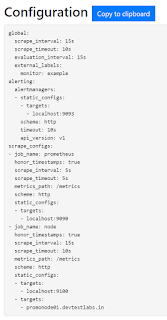 You would be able to scrape targets from the config file /etc/prometheus/prometheus.yml
Further nodes, could be added in scrape_confis and you can define the targets for specific intervals.

If there are no intervals defined, it would be considered from the global section of the prometheus. i.e 15s.

tail -20 /etc/prometheus/prometheus.yml
# Here it's Prometheus itself.
scrape_configs:
# The job name is added as a label `job=<job_name>` to any timeseries scraped from this config.
- job_name: 'prometheus'
# Override the global default and scrape targets from this job every 5 seconds.
scrape_interval: 5s
scrape_timeout: 5s
# metrics_path defaults to '/metrics'
# scheme defaults to 'http'.
static_configs:
- targets: ['localhost:9090']
- job_name: node
# If prometheus-node-exporter is installed, grab stats about the local
# machine by default.
static_configs:
- targets: ['localhost:9100']

Search from the graph you could find many of the metrics related to the prometheus or with the nodes which you can configure.
search by "prometheus" or "nodes" will provide all the metrics details.

Lets, look for the memory graph for the nodes...
console

Even your prometheus server won't be able to query the new node as it would be unreachable. there are a couple of solutions ..
1) either you would allow from only your domain and restrict other traffic.
2) You could install nginx reverse proxy and add a path specific for the node exporter.
Add the new exporter to the prometheus server for monitoring.
tail -6 /etc/prometheus/prometheus.yml
- job_name: node_promonode01
#
static_configs:
- targets: ['localhost:9100']
- targets: ['promonode01.devtestlabs.in:9100']

Configuring reverse proxy to the newly installed Prometheus node exporter
Refer to previous post on how to setup nginx reverse proxy..
https://sunlnx.blogspot.com/2020/11/prometheus-installations-and.html
Modify the nginx conf for the new node, with below location to allow prometheus server to query the data.
sudo vim /etc/nginx/sites-enabled/promonode01
location /metrics {
allow  206.189.139.255;  <== Promotheus server
deny all;
proxy_pass           http://localhost:9100/metrics;
}
Even if there is a request http from the prometheus server, nginx would convert to https and will redirect traffic to provide metric details to the server.
These configurations already exist on the server.
server {
if ($host = promonode01.devtestlabs.in) {
return 301 https://$host$request_uri;
} # managed by Certbot

try to hit the URL, you would be getting the Forbidden Error as it won't allow your to get the metric details.

Try to hit from the prometheus server using curl, you would be able to retrieve results.
curl -X GET https://promonode01.devtestlabs.in/metrics

Deleting Time Service DataBase for unused nodes
Data will be automatically deleted after the storage retention time has passed. By default it is 15 days.
If you want to delete specific data earlier, then you are able. Since we have configured a couple of new job_name in the config files it would show us a couple of wanted nodes in the graphs, we would be deleting them.
Even though below are the 3 nodes, from the time service database shows us a couple of more graphs... 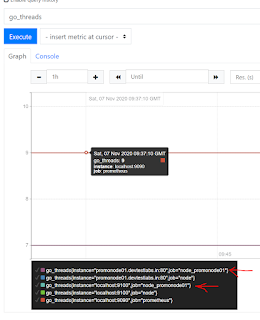 You need to enable the admin api in Prometheus before you can.
sudo vim /etc/default/prometheus
ARGS="--web.enable-admin-api"

curl -X POST \
-g 'http://localhost:9090/api/v1/admin/tsdb/delete_series?match[]={instance="promonode01.devtestlabs.in:80",job="node_promonode01"}'
After executing the above queries from the prometheus server, you would no longer be able to see the nodes in the graphs. 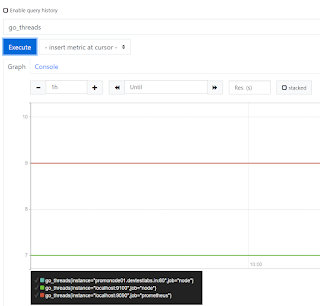 After deleting you should disable the admin api again,
sudo nano /etc/default/prometheus
Remove --web.enable-admin-api from the ARGS variable. eg,

That's so far we have on this tutorial. we would see more on the coming tutorials.