Initially thought to write about the docker command-line & configuration, later it was been advised by few of my colleagues that a brief introduction about Linux containers would be much helpful and hence I though to share below introductory article.
Several components are needed for Linux Containers to function correctly, most of is them provided by the Linux kernel. Kernel namespaces ensure process isolation and cgroups are employed to control the system resources. SELinux is used to assure separation between the host and the container and also between the individual containers. Management interface forms a higher layer that interacts with the aforementioned kernel components and provides tools for construction and management of containers. 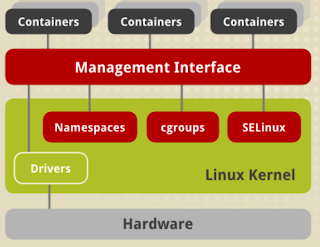 Namespaces
The kernel provides process isolation by creating separate namespaces for containers. Namespaces allow you to create an abstraction of a particular global system resource and make it appear as a separated instance to processes within a namespace. Consequently, there are several containers which use same resource simultaneously without creating a conflict.
Control Groups (cgroups)
The kernel uses cgroups to group processes for the purpose of system resource management. Cgroups

Containers. Docker builds on the aforementioned kernel capabilities, adding several enhancement
features, such as portability or version control.
Containers
There are two general scenarios for using Linux containers in RHEL 7
1. Host Containers : a tool to carve out containers as lightweight application sandboxes, each runs the same user space as the host system, so all applications running in host container's share userspace and run time.

2. Image-based Containers :
An application is packaged with individual run-time stack, which makes it

independent from the host operating system. This way, you can run several instances of an application,
each developed for a different platform. This is possible because the container run time and the
application run time are deployed in the form of an image.

Image-based containers allow you to host multiple instances and versions of an application, with minimal overhead and increased flexibility. Such containers are not tied to the host-specific configuration, which makes them portable. These features are enabled by the Docker format for application packaging.
docker command-line & configuration will be explained in next post.
Sunil Amperayani
Posted by milearning at 11:30

Email ThisBlogThis!Share to TwitterShare to FacebookShare to Pinterest
Labels: redhat